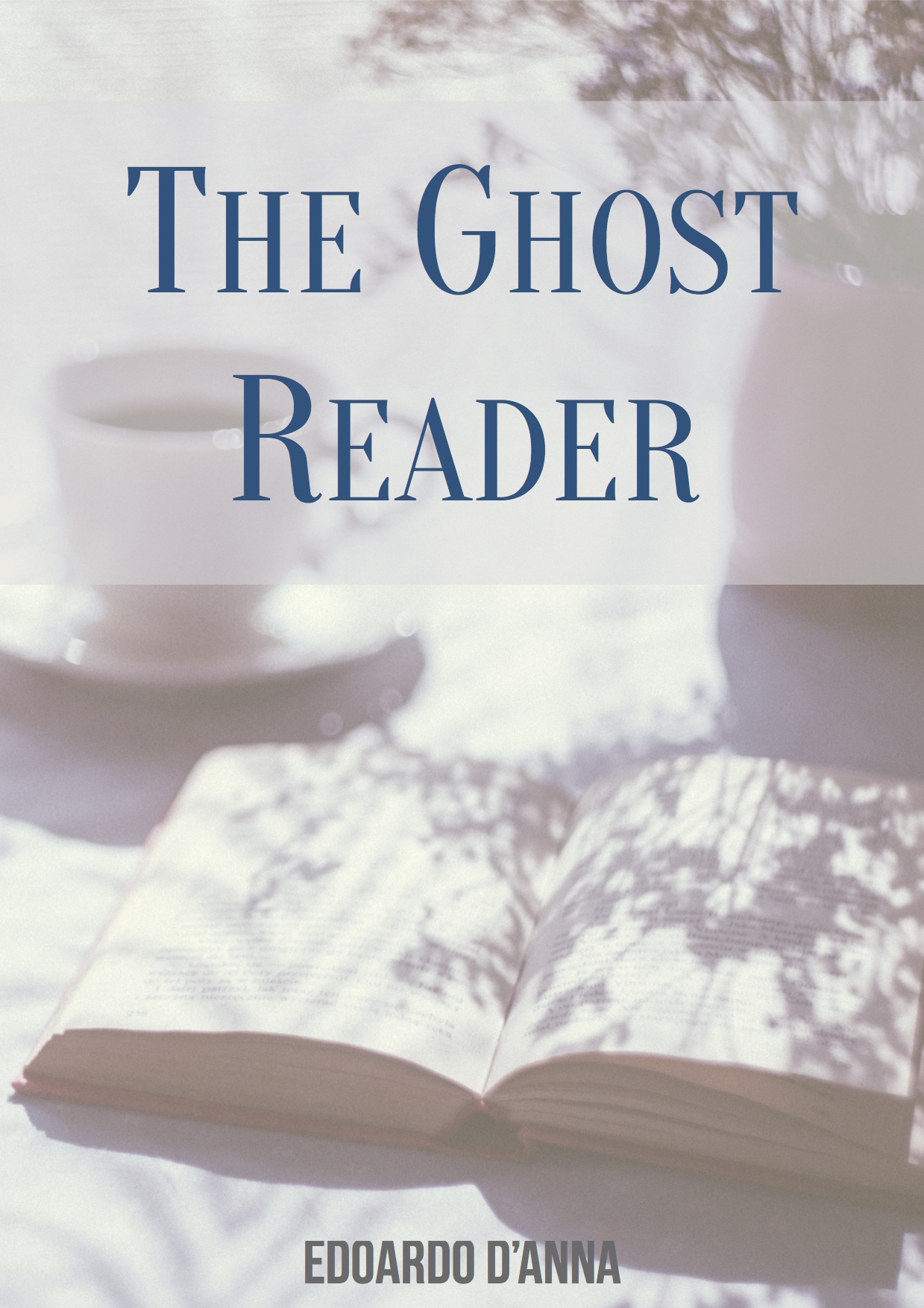 Of late, she had noticed the man sitting in the back of the tea-room, a book always in his hands and a cup of coffee carefully balanced on the edge of his knee. Or was it a hot chocolate? She couldn’t really tell. He sat in the same spot, day after day, reading his book and drinking his — whatever it was. She didn’t think of herself as someone who might spend time fretting about strangers sitting in cafés, minding their own business. But this man had something about him. Perhaps the way he held his book with ease, never shifting his weight to accommodate the unavoidable build-up of tension in his arms. Perhaps the fact that the books he read had blank jackets, with no visible title. Or maybe it was the cup; it wobbled every now and again, threatening to spill its contents all over the polished wooden floor, but it never quite got to it, staying on the man’s leg as if held there by some invisible mesh of wires. Now that was certainly peculiar. She had even tried placing her cup in her own lap as an experiment, but the results had been disastrous, with a burn to the inside of her thigh and the unnecessary waste of a perfectly good cup of coffee. This had led her to the conclusion that the man was no amateur cup-balancer. He meant business.

She came in everyday herself, to eat breakfast and disconnect from it all. One morning, as she sat in her chair peering inquisitively at the man over her newspaper, like a detective in a cheap movie, an intriguing development unfolded right before her eyes. The man closed his book shut and carefully placed it on the table. His gaze wandered around the room, stopping to take in the exposed piping above him, which when noticed for the first time gave one an almost obscene sense of voyeurism at having caught the room unaware, its delicate internals bare and exposed. He smiled pensively as he continued to scan his surroundings. She felt a cold drop of sweat form on her forehead when his eyes met hers, but he took no special notice of it. After exhaling loudly, the man stood up, grabbed his book and left. She followed him.

In the street, the cold air burned from the inside as it filled her lungs. It had snowed a few days back, but most signs of the event had long disappeared into drains, in liquid form and with a sparkle of salt. The cold, however, persisted. Despite the early afternoon hour, the winter sun was already dipping under the horizon, taking the little light it had deemed fit to shine on the world away with it. She made sure to keep her distance from the man. As he darted around a corner, the street lights turned on with a flicker, and she wondered who controlled them.

The man went into the public library. They walked past the front desk, where an old guard looked as if he had been dropped on his chair like a pile of dirty clothes, fast asleep. The main hall was mostly empty. A handful of silent students browsed the internet in a corner under the powerful greenish light of the reading lamps, installed at a time where the pages people read from did not emit light of their own. She felt a sense of foolishness slowly rising in her. This man had finished his book, and was now coming to look for another one. Nothing peculiar there. What had she been thinking, following him like a lunatic stalker? She was about to turn around and leave, when the man stopped next to a table occupied by a handsome young man, who couldn’t have been more than twenty-something. He wore the fancy clothes of a banker, but none of the self-assurance. She swiveled around and approached the two of them, pretending to look at the books nearby. Why was the man meeting with a banker in a library?

From where she stood, and she didn’t dare get any closer, she couldn’t make out both of their voices distinctly; she could only hear the young man’s, who had apparently never learned to respect the sacred silence of libraries.

“That’s amazing,” he said at one point, after the man from the café had been talking for quite some time. The banker, as she thought of him, was writing in a black leather notebook. His hand moved the pen with great speed over the pages, and she thought she could hear the scratching of metal against paper.

“That’s very insightful, you never cease to impress,” he continued.

She took a book from the shelf and pretended to read from it. It was a story about dogs, from what she gathered. The banker kept writing in his notebook, occasionally asking the man questions. After about a quarter of an hour — it couldn’t have been more — the banker slammed his leather booklet shut with a satisfied smirk.

“We’re all good,” he said. Then, he extracted a book from his suitcase, glanced around the room and handed it to his interlocutor. The man from the café removed the blank jacket from his book and transferred it to the new one. He returned the old book to the banker, who quickly placed it in his suitcase. They both stood up.

The man acquiesced before taking the banker’s extended hand and shaking it vigorously. Who should she follow? Surely the man was heading back to the café to read his new book. But this young banker; perhaps she could find out something new there. The thought of minding her own business did cross her mind, but she shrugged it off with ease. Instead, she went after him.

The streets had grown even gloomier, and the air was so dry and cold that she half expected her next breath to freeze over and fall at her feet. This part of the city was busier, with people scurrying about, moving from a store to the next, occasionally stopping in a tea-room, or any place with central heating.

The banker had produced a phone from his jacket, which he was attempting to operate despite wearing gloves, to little effect, judging by his intermittent cursing. After a while, he gave up and pulled a glove off using his teeth.

“Hi Michael,” he said after dialing a number, “I have great news for you, wanna hear it? — I’m almost done writing the review on the latest McNephew novel. A true masterpiece, I’m telling you. We should publish the column as soon as possible — yes, of course, I understand — I’ll send you my notes as soon as I’m back in the office — I just stepped out for a drink. Sure. Talk to you soon. Bye.”

He wasn’t a banker after all, she thought. It was all starting to make sense. This little man didn’t want to read his own books, or make up his own mind. He farmed it out. She wondered: was he well renowned? Did thousands of people impatiently wait for the mailman every Sunday to read his literary review column? Or was he a second-class writer, the kind that inhabit literary limbo, just shy of being given entry to the pantheon of writers, but sadly not hopeless enough to be given the axe either. Whichever it was, she thought, he was a fake, a phoney, and didn’t deserve any of it.

The young critic stepped into a tall glass building. A guard stood in front of the large revolving door, and she realized she would not be able to follow him any further. Huge black letters hung behind the transparent facade, spelling out the words: The Weekly Times.

The man was in his usual spot, reading a coverless book. She observed him for the longest time, wondering what he knew about the young critic and how he was using him for fame and recognition. Of course, he was certainly aware of the details of their arrangement. But why did he agree to it? Her curiosity had reached levels she had never suspected were possible. This man and the reason for his reading were in no way her concern, and yet she felt an urge to investigate further.

“Is it any good?” she asked, having walked up to him with a few timid steps.

He slowly lowered the novel and gave her a startled look. “Excuse me?”

“I’m not sure yet,” he said. She was taken aback by the sound of his voice, which was deep and melodious, the kind belonging in an opera. She looked at him awkwardly for a moment. An almost imperceptible smile had crept over his face. He enjoyed watching her fumble for something to say.

“I noticed you often come here to read,” she said.

“It’s a quiet spot,” he said, before adding, “most of the time.” That smile again.

“As you have observed, yes.”

She was about to turn around and leave, unable to meet his judgmental gaze any longer, when the man seemingly changed his mind about being aloof and offered a monologue.

“An avid reader,” he said pensively, “Yes. I love reading above everything else in life. Sure, there are many good things on offer, but nothing quite like reading a good book. There’s something about written words, the way they convey deeper meaning and pure, unadulterated experiences. They can play the remote chords within the human soul, the strings that spoken words can never reach. Oh the music! The music of the written word spreads through the mind like a boundless tsunami. Everything ebbs and flows in rhythm with commas, dots and semicolons! A book — and I’m talking about a good book here — can open a magical channel of communication between reader and writer, where information is transmitted at a more primitive level; not with facts or figures, but with the intimacy of raw emotions.”

The sudden contrast between the man’s standoffishness and his heartfelt ode to writing stunned her for a few seconds. She tried processing what he had just said, not completely sure she understood.

“With a mind like that,” she finally said, “surely you must be a book critic!”

The man looked at her with sudden suspicion.

“Well, you clearly love reading,” she said, “I just assumed you must be in a line of work which allows you to read a lot. But never mind, I’m no expert of such things.”

He smiled again, reassured that she knew nothing about his little secret.

“I’m not a book critic, I couldn’t stand all the hustle. I fear it wouldn’t be conductive to real reading, which requires calmness of mind. But you are right, I am fortunate enough to have a job which allows me to do a lot of reading.”

Her lips curled upwards to reveal her teeth. She felt a rush of shame flow through her mind as she realized how far she had intruded into this man’s life. All the normal inhibitions which should have prevented her from stalking him in the first place were racing back to her consciousness. Or maybe her curiosity had simply been satisfied. Regardless of why, she said:

“I do apologize for my intrusion, my curiosity tends to keep my good manners at bay. It was a pleasure meeting you. I wish you an enjoyable read.”

“The pleasure was mine,” said the man with a slight bow.

She took a few steps before changing her mind and turning around.

“What is it you’re drinking?” she asked.

“Earl Grey,” he said, picking up the cup from his knee. “There’s nothing quite like it.”