Why free will doesn’t exist

a brief tour of the world’s oldest question 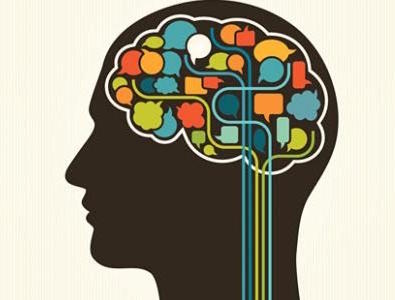 The existence of free will is a classical question in philosophy, and one which has been around for a while (unless you consider Greek antiquity the recent past). Unlike some of the more far-fetched thought experiments philosophers like to indulge themselves in, free will is something everyone can relate to, and about which everyone seems to have a strong opinion. This arguably makes it hard to approach the question rationally, considering everyone starts with a deeply rooted prior position.

Before we dive into the thick of the subject, we need to define a few things. Let’s start with epiphenomenalism, which is the belief that conscious experiences are a by-product of our brains’ activity. Adherents of this view state that the brain's activity is the sole cause of any observable behaviour, and that conscious emotions cannot influence the output of the system. To borrow Thomas Huxley’s words: “consciousness is completely without power…as the steam-whistle which accompanies the work of a locomotive engine is without influence upon it’s machinery.” In this framework, we might think we cry because we are sad, but in reality, there is a common cause to both events. Something made us cry, and that same thing gave rise to the conscious experience of sadness, thus creating the impression that we cry because we are sad, when in reality we cry for the same reason we feel sadness, whatever that reason may be. Although epiphenomenalism is the fancy name for it, this is identical to saying humans are automatons, responding to external stimuli in deterministic ways.

Another concept which needs defining is qualia. Simply put, a quale is "the way it feels” to experience something. For instance, the subjective experience of pain is a quale. If one were to describe the feeling of pain to another person, no matter how precise the description, the listener could never experience the quale associated with it, and would certainly learn something new about pain once he experienced it for the first time.

Okay, now that the defining is out of the way, let’s get to it.

The following reasoning, which is anchored in our current understanding of the brain and the nervous system (limited as it may be), is, in my opinion, the strongest argument for epiphenomenalism yet. It goes like this: the only way humans can interact with the outside world is through the motor system—the nerves and muscles controlling our movements, speech and everything else. If we follow the chain of events leading to any motor action, we will find that the muscle contraction responsible for the movement was the result of the firing of a motor-neuron (a type of nerve cell). If we trace that neuron backwards, we will find that it originates somewhere (perhaps in the spinal cord, or in the brain). At this point, we may ask ourselves why that neuron fired. We know from neurophysiology that a neuron fires whenever all the other neurons which are connected to it manage to affect its voltage sufficiently (depolarise it and trigger an action potential). So in order for that specific motor neuron to be active, some of the ones connected directly to it had to be active before. In turn, those neurons themselves could only be active if their own partners were—you can start to see where this is going. If we continue following the chain of events, we can explain all of the activity a person produces as a logical (and inevitable) consequence of the past state of all the cells in his or her brain, spinal cord and nerves. 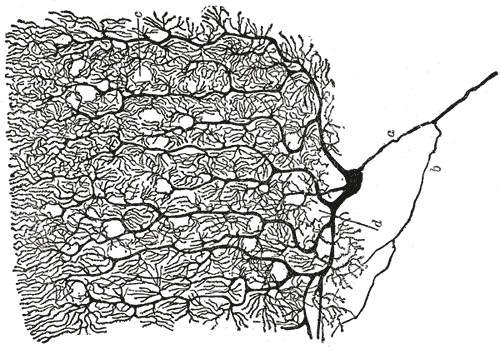 A neuron’s dendritic (input) tree. This “tree” allows the neuron to create contacts (synapses) with a large number of other cells.

In fact, there is a growing body of empirically evidence supporting this view. The readiness potential (first reported in 1964) is a stereotypical activity which can be measured in specific brain areas (such as the motor cortex). What makes this particular type of activity interesting, is that it has repeatedly been shown to precede the conscious decision to move. Some scientists have even designed an experiment in which a computer predicts whether or not a subject will press a button, before they do so (and more importantly, even before they consciously decide to do so). Of course such studies still have some weaknesses (for instance, how does one precisely determine the point in time where a conscious decision is taken?) Still, these types of results are certainly enough to give pause.

This seems to lead to the inevitable conclusion that free will cannot exist. Any quale, any conscious experience, must either be a side product of the brain’s activity (like the whistle of the locomotive), or perhaps, an intrinsic property associated with the state of the network of cells in the brain (this view is called materialism, or physicalism). However, these subjective experiences cannot shape the outcome in any way.

In order for any characteristic to survive the process of natural selection, it should confer an advantage in terms of survival.

Of course, this raises the question: why do we have consciousness at all, if it is useless? In other words, we might as well be philosophical zombies (a philosophical zombie is a being which acts exactly like we would expect a human to, but does not experience qualia, or any type of conscious experience). This is of course a very difficult question to answer. Indeed, it would seem odd that consciousness exists at all, if it provides no evolutionary advantage. One possible answer to this conundrum, which has recently become popular again (owing in part to the work of Giulio Tononi and Christoph Koch), is panpsychism, or the idea that consciousness may actually be an intrinsic property of the universe (like mass). In this view, every object has some degree of “consciousness”. Of course, a rock may have little (or perhaps none), while a structured group of cells (like a brain) may have a lot. The reason this theory is interesting, is that it helps solve the evolutionary argument: if it is impossible to have a system which processes information, without having an associated subjective experience, then it would follow that as evolution selects for increasingly complex organisms, these organisms must automatically have a growing amount of consciousness and subjective experiences. This is exactly what Giulio Tononi tries to formalise in his integrated information theory of consciousness (I encourage you to read more about this fascinating science here). 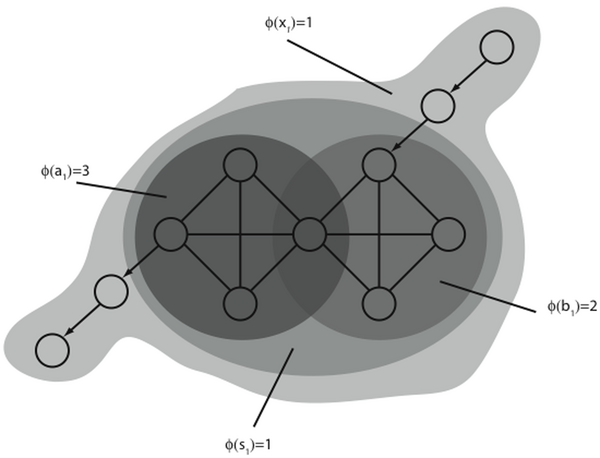 In Giulio Tononi’s theory, how tightly connected a set of nodes are determines how high their consciousness (or phi) is.

In practical terms however, the brain is a chaotic system—meaning that although it is most likely purely deterministic in nature, predicting the outcome is not feasible on any relevant time scale. Like the weather, it would be impossible to predict a person’s actions based on the current state of his brain, for more than the immediate future. This leads to the following comforting conclusion: we do not have free will, yet nobody can predict what we will do next (outside of some specific “press the button” types of situations).

One of the most popular arguments against epiphenomenalism (or any theory which argues for the non-existence of free will) is the “obvious absurdity” argument—it is plain for everyone to see that we have free will, since we constantly take decisions and execute actions according to our own desires. This argument, although very emotionally convincing (like when the old professor suddenly lifts his arm in the air and exclaims: “no free will my ass!”), entirely side-steps the problem. If epiphenomenalism is true, and we are under the illusion that our conscious experiences precede and cause our physical actions, then we would by definition be under the illusion of having free will. Any individual’s conviction of possessing free will is therefore not evidence for, nor against, either position. To paraphrase B. de Spinoza's pithy remarks, we are under the illusion of freedom simply because we are conscious of our actions, and unconscious of the causes whereby those actions are determined.

There may yet be one way to escape the inevitable conclusion that free will does not exist: quantum physics. If we look at the behaviour of very small systems (atoms, molecules, etc.), the classical laws of physics we are accustomed to at our macroscopic scale start breaking down. In the world of the tiny, matter behaves in a fundamentally different way. It behaves according to statistical laws, which means some questions cannot be answered precisely, but only in terms of probabilities. For instance, it is impossible to predict when a radioactive atom will decay. This means that at such small scales, determinism has some wiggle room. This wiggle room is where the theories known collectively as quantum consciousness come into play. Indeed, some scientists argue that the processes underlying the brain’s function are subject to the laws of quantum mechanics (because neurons operate at a scale where such phenomena are relevant). That the brain is subject to quantum effects does not, per se, tell us anything about free will. However, some have argued that free will may be introduced into the system by playing with the probabilistic nature of quantum mechanics. In this far-fetched view, the outcome is not altered on average, but free will intervenes by changing the outcome at the level of single quantum events. To give a simple analogy, this is like saying that free will may change the number we get when throwing a dice, but on average, each number must still appear in equal proportions. So if we force a specific number to appear now, we must compensate for it later. This very limited wiggle room may still be enough to give us a small nudge in the direction of free will.

The great physicists of the past century may ultimately hold the key to free will.

So far, none of the quantum brain theories have gained widespread adoption (mainly because there are no convincing ones yet). Still, quantum mechanics may be regarded as the last hope for those trying to prove the existence of free will.

I hope this article has awakened your curiosity about the subject of free will. If it has, I encourage you to read up on it to get a more balanced view of the question. If you find something interesting, do come back and share it in the comments!